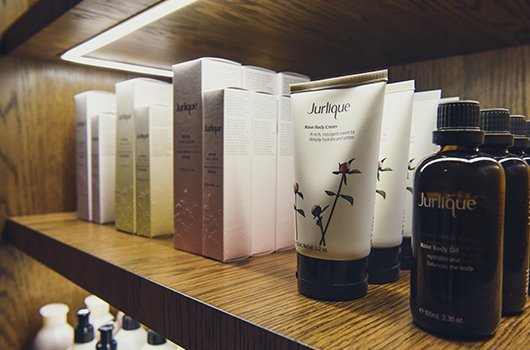 Jurlique is a purely natural skin care company founded in Southern Australia. Jurlique’s expansion both domestically and within Asia had previously led to the overall decline of awareness among American consumers.

The brand was recaptured after a network of independent spas formed partnerships all across the country.  Once established, the partners networked to reintroduce the company to the American market.  A roll-out model was created with Countertop POP displays and co-branded “spa-takeovers”.  A flexible catalog of both individual fixtures and full environments was created for a roll-out model that is “on brand” and easily scalable.

Jurlique’s activation of numerous interior design standards was greatly established internationally.   In order to adapt these concepts within the American market, Jurlique sought out the expertise of a mutually ambitious and “common ground” partner.  Hence, Retail Habitats was brought on board to establish new design specifications and vendor relationships.  The partnership with its full support, and multifaceted environmental branding efforts have ensured the successful return of Jurlique in the US.

Jurlique brokered a deal with the InterContinental Hotel in the Buckhead district of Atlanta, GA soon after collaborating with Retail Habitats.  The goal was to renovate and rebrand their onsite spa.  The entire interior concept was then created in order to establish a baseline aesthetic and scalable catalog for all future fixture & POP display design engagements.

Retail Habitats was inspired by Jurlique’s Australian interior design standards which then inspired the creation of an environment that brought an elevated design sensibility to the space.  Some of the various architectural features needed to remain “as is.” The spa has an elegant decor that is comforting with its warm wood finishes, classic brass accents, and modern graphic art which grace the entry way, through the reception area, and back to the treatment rooms.

Retail Habitats created a team from its network of trusted industry partners.  The combined effort of contractors, fabricators, and seamstresses were coordinated to implement the process to reach the end goal.  Procurement services were enlisted to coordinate the specified furnishings, accessories and fixtures being purchased, shipped, and delivered on time to complete the project.

The MINT team is the most experienced team in the industry at delivering holistic retail solutions.

For a fraction of the cost of internal resources and guaranteed results MINT will ensure your retail projects are executed at the highest level.